Where's the Davenport?
By Greg Close

Having recently retired from recreational scuba diving after some 50 years of it, I’ve been reasonably satisfied that I’ve seen and recorded most of what I wanted to see. However there is one thing in particular that has always had me wondering if, despite the time and effort put into it, I could have found the final resting place of the Davenport. 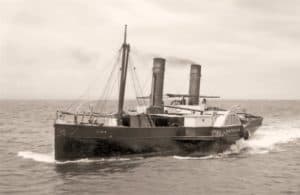 The Davenport played a crucial role in the early history of the Mersey River as prior to her arrival it was possible to walk across the entrance at low tide. In company with the ‘Agnew’ acting as tender, she did 6 or 7 trips a day until the river was 100 metres wide and deep enough for shipping at low tide by removing the bar way in the centre of the river. She was also responsible for the removal of most of Policeman’s Point at East Devonport. 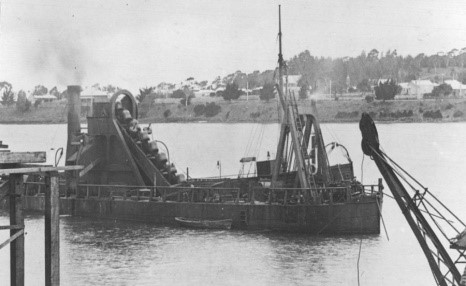 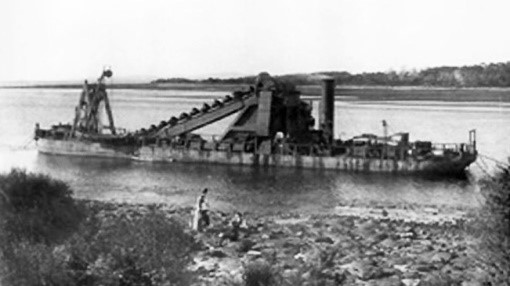 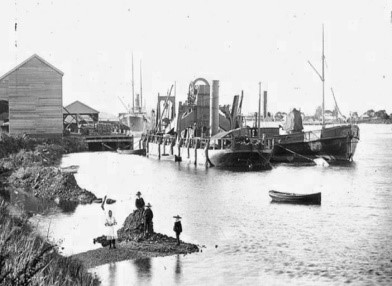 A keen diver and resident of Devonport for over 45 years and knowing that a decent sized ship had been scuttled close by, has always played on my mind as being the perfect location to establish and build  on as an artificial reef.

During the mid. 1990’s the Leven Scuba Club inc.  (the only scuba club on the NW coast and with whom I have Life Membership), started an artificial reef project which ran through to 2003 and involved the scuttling of a wooden ex. Navy/ ex. fishing vessel off Don heads  and  building  ‘Reef Ball’ modules  placed in another  location between Horshoe Reef (off the Devonport Airport) and Hawley Point. (Details available on the Leven Scuba Club web site: www.levenscubaclub.com.au)

During the location survey process required by the Dept. of environment and sea dumping, the club carried out dives off Moreland’s Beach to a depth of 20 metres including an area I thought might contain the remains of the Davenport. Nothing of interest was found so bare sand bottom was selected for the reef balls away from any other structures just West of Hawley Point.

The clues I worked on regarding the position of the Davenport were from published articles which lead me to believe the wreck of the Davenport would be in a very safe depth for recreational diving at 40 ft. (around 12 metres). 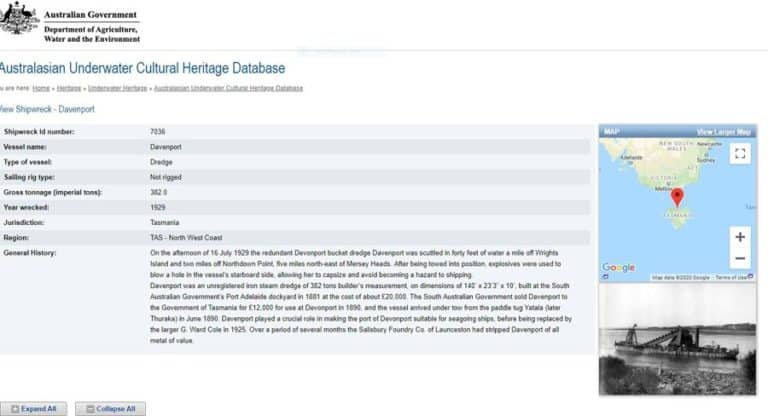 Further information published in ‘The Advocate’ on Wednesday 17-7-1929 stated:

They used 40lb of gelly (gelignite) causing her to heel over after the first blast, second charge caused her to sink, sank within one minute and toppled over due to the 60 ton weight of the buckets which stood 20 feet high and the assembly was 90 feet in length.

Given that only valuable metals (at that time) such as gunmetal, brass and copper were removed prior to scuttling, there should still be a large metal structure still relatively intact somewhere to the East of Horseshoe Reef/ Wrights Island.

However some confusion remains as to the depth and indeed to the stated location of the scuttling. The Australasian Underwater Cultural Heritage database states the coordinates for the scuttling of the Davenport to be:

This puts the remains of the Davenport in much deeper water North of West Head!

I don’t believe these coordinates to be correct for the scuttling of the Davenport given the eye witness reports putting the position somewhere between Horseshoe Reef and Hawley Point.

The area suggested in the Database has been used for scuttling other vessels and indeed one of the other Mersey Dredges, the ‘J. H. Astell’, was disposed of in that general area in 1968. 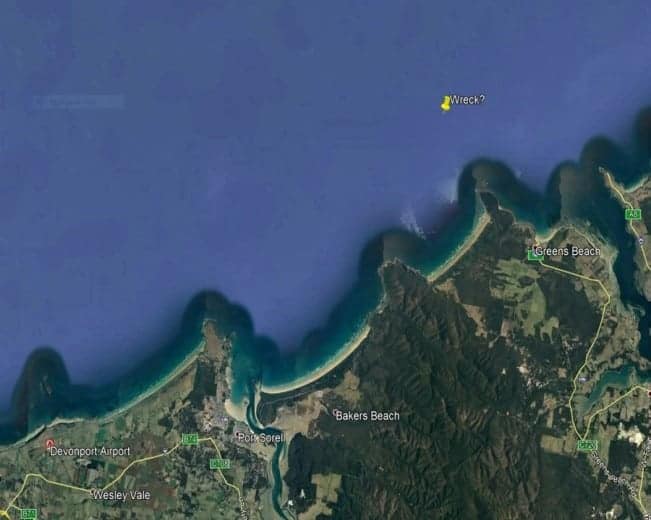 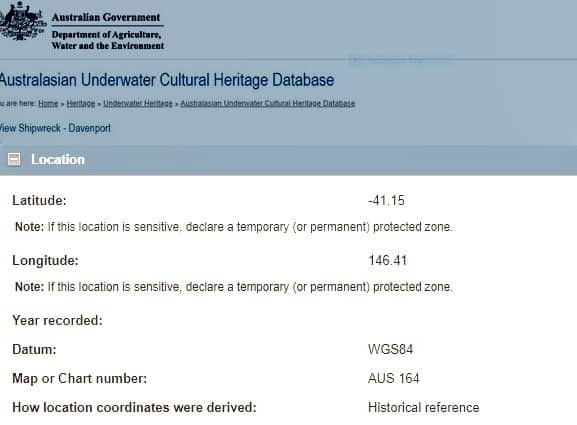 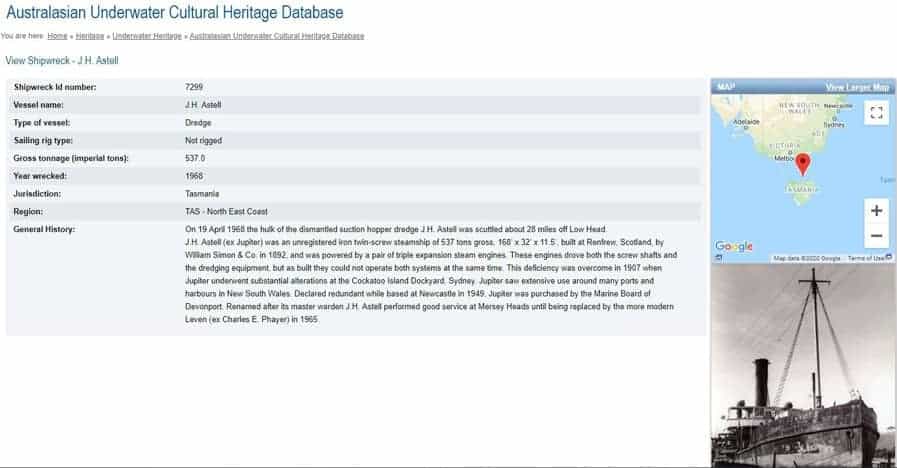 So on to the search!

After discussion via Email with keen diver/environmentalist/historian and mad ‘wrecky’ Mike Jacques who had done some research on the Davenport, I decided to invite  Leven scuba club members to accompany me in a series of dives East of Wright’s Island/Horshoe Reef in an attempt to locate the final resting place of the Davenport.

My plan was to follow the bottom profile with a depth of 12 to 15 metres from approximately one kilometre east of the island and record GPS coordinates of any bumps of any significance which showed on my echo sounder/fish finder. The eastern extremity of the search planned to be adjacent to Northdown Head which shows quite prominently about halfway to Hawley point. 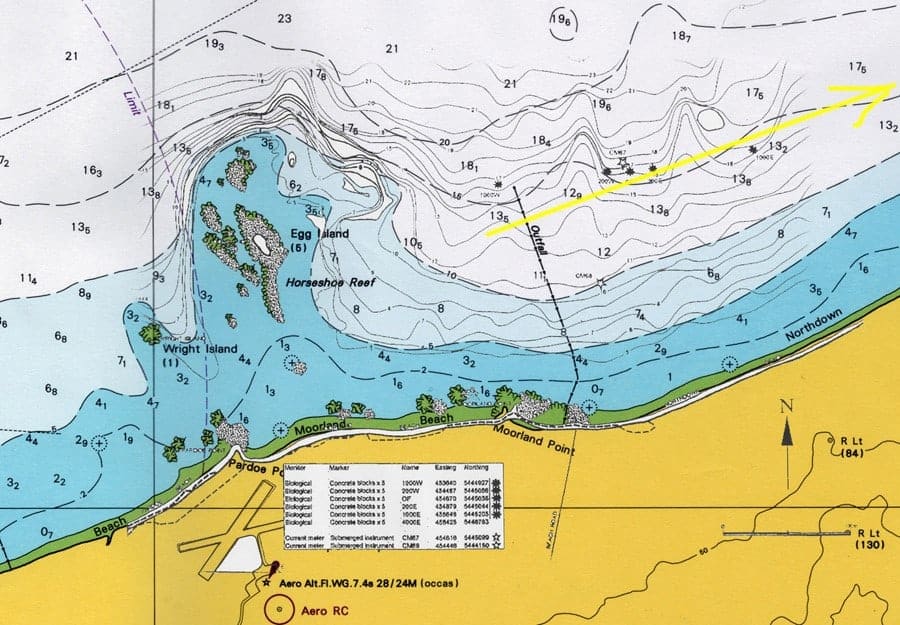 During the initial survey in March 2010 we were able to dive on and identify the pulp mill outfall pipe and the modules used to monitor environmental changes due to the outfall. There were also several concrete blocks placed in a regular pattern which I believe were there to provide a stable location for marine growth experimentation and collection. We saw nothing which looked remotely like the remains of the Davenport.

Subsequent dives in March 2010 along the profile were on targets showing on the sounder as ‘bumps in the bottom’ and all turned out to be rock piles and outcrops. A quote from my dive log said:

Checked a few more targets off Northdown head in 14 to 15 metres, all turned out to be rocky outcrops. Plenty of fish around them mainly Silverbellies!

I did one full circuit of the anchor line on the final target for the day and then returned to the surface to photograph blue bottles which had blown in on the surface. There were large numbers all the way back to Horseshoe Reef. 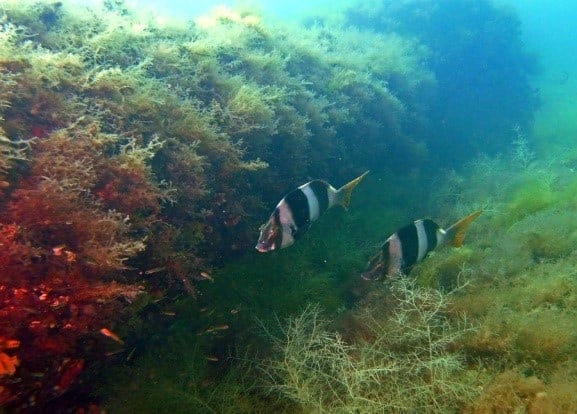 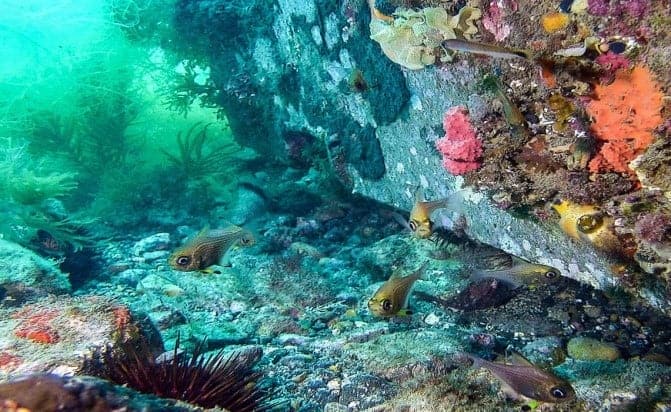 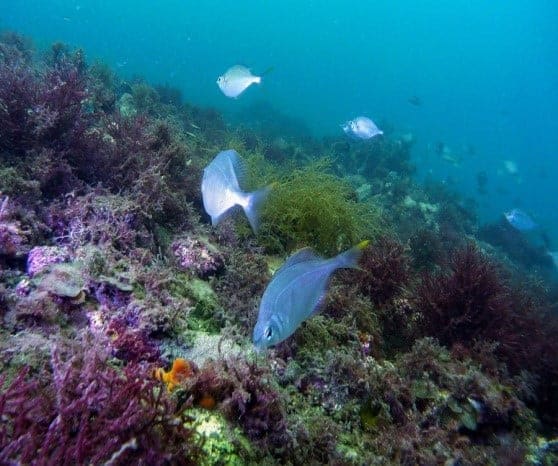 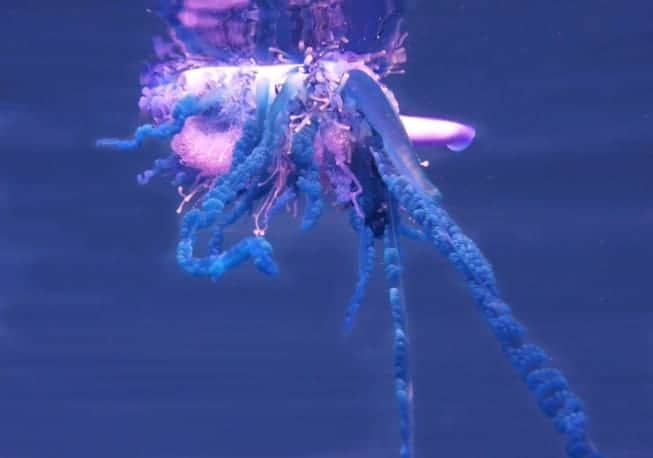 The dives and search were largely unproductive as far as the Davenport goes, however it was great to have a better look at the pulp mill outfall pipe.  With the pulp closure and the pipe not emitting anything into the sea, the environment looked pretty good not just along the pipe, but around the end as well. In recent times, the pipe itself has become one of the Leven scuba club’s regular dive sites. 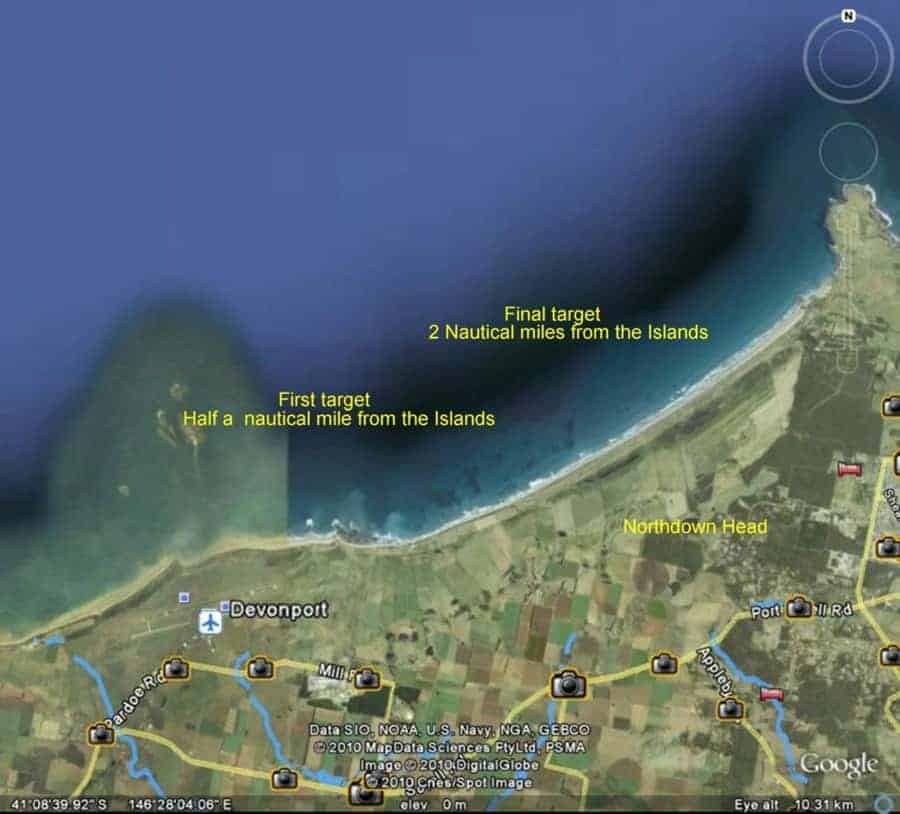 How the remains of the Davenport might look now after 90+ years completely submerged is anybody’s guess. Whatever remains is likely to be at least semi submerged in the bottom shingle and sand. The bucket assembly is large and solid enough and the cast iron components would not rust to the degree of metal that is exposed to the air as in the wrecks of the Agnew and G. Ward Cole on the Eastern shore of the Mersey. They still have some structure left and both were just hulls when abandoned.

Marine growth is likely to be covering whatever parts are clear of the sand and may not be easily recognised by a diver. Regularity in what you see is a clue to what is man-made. It would be ideal to access to an underwater magnetometer to tow along in conjunction with side scan sonar, but neither were available to me for the search we did. Maybe now that Fish finders have improved to include high definition side scan that someone else might give it a go. We have a potential dive wreck and artificial reef in the wreck of the Davenport near Devonport if we can only find it!

It’s ironic that I may have done just that accidently. Back on the 17-11-1987 a good dive mate, (since passed away) and I had a day out in my boat off Horshoe reef. Our intention was to get either a cray or some fish for my mate’s mother.

We dived on a favourite spot off Horshoe reef, saw a couple of cray but they weren’t easily accessible. We had an enjoyable dive anyway.

We pulled anchor and just let the boat drift off to the east with the light wind and current and ran the fishing lines out to casually try for flathead while we had a bit of lunch. We were well clear of the reefs and we just needed to keep watch occasionally on our position and tend to the fishing gear. I think we picked up about 4 or 5 flathead amongst numerous gurnards when all of a sudden the lines went absolutely crazy!

Both rods were bent double and both of us had our hands full with the fight that ensued! We couldn’t believe our eyes when colour hit the surface. Beautiful snapper both about 3 kg each with others following them up! Managed to get them aboard without a net, rebaited and went again, same result bang, bang! Another two about the same size came aboard. Rebaited, bang, bang, another two on! Unfortunately we lost one trying to boat it as it was bigger than all the others, then nothing more. It appeared we had drifted from where they were hanging out.

About this time I woke up that perhaps I should have taken notice where we were relative to landmarks (No GPS in those days). We were so busy with the fish and in open water that really I could only guess on a general area of perhaps a square kilometre as to where we struck the snapper. I did take a bearing on the pulp after motoring back to where I thought it was and that was 210 degrees and 20 metres depth. I’ve been over that area many times since but never again struck the same hot spot. 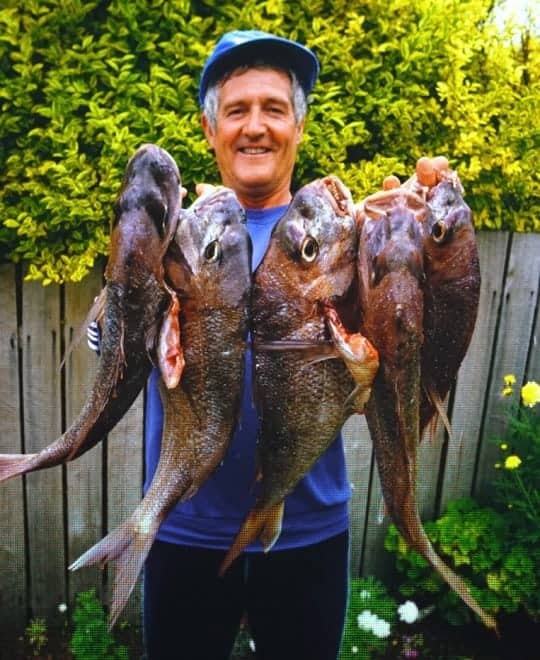 Should the Leven Scuba Club, or anyone else for that matter decide to continue the Search for the Davenport, I would suggest that a depth profile of 18 to 23 metres might be more productive. A High Definition fish-finder would be a definite advantage and if some-one was to have an underwater magnetometer just laying around I’d love to hear from them.

I guess that knowing exactly where an old dredge lies under the sea is of no consequence to most people, but wreck diving and artificial reefs are big business in many parts of the world and apart from the economic benefits to both fishing and recreational dive industries, it’s of great benefit to the marine life itself by providing additional habitat.

To me wrecks are structures which attract marine life and allow it to multiply and migrate to adjacent areas, if those structures can also be protected from commercial operations particularly netting, the whole ecosystem benefits. 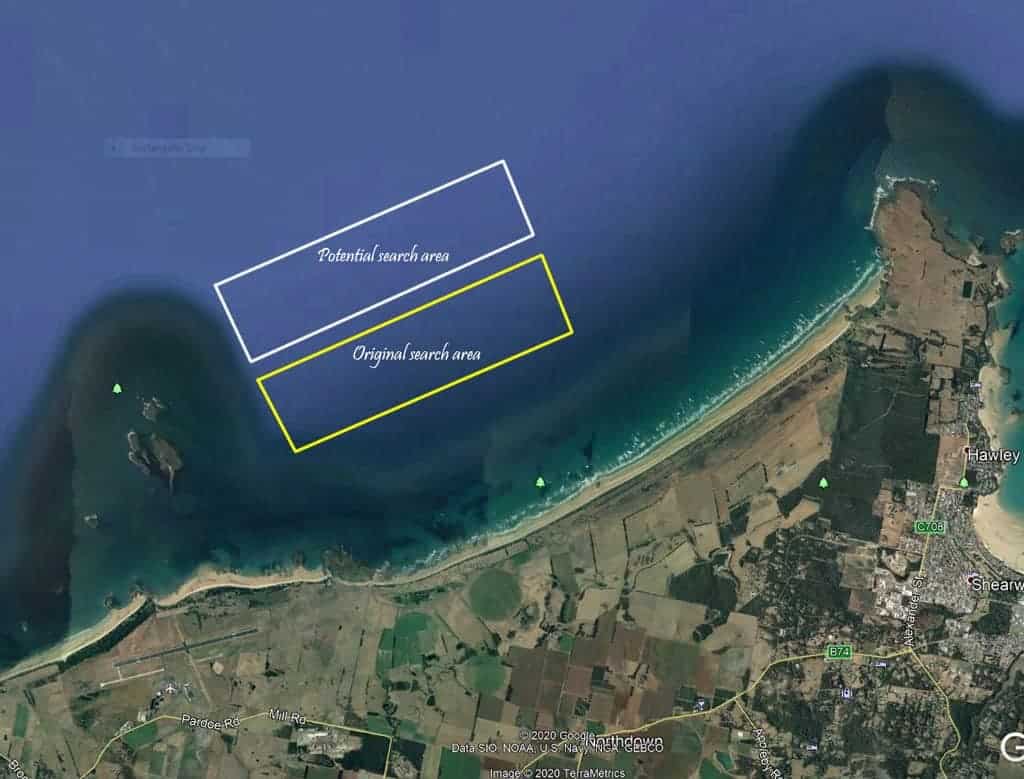 In Memoriam: A good dive mate, Maurice Kelly passed away 17-3-89 at Granville Harbour.