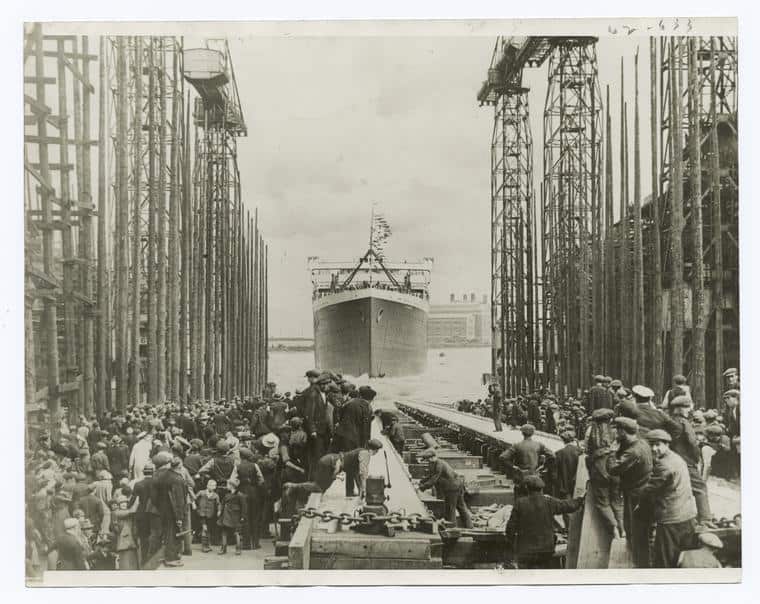 Built in Belfast by Harland and Wolff, the Asturias was the largest motor ship built at that time. Launched on the 7th July 1925, she could carry 410 first class, 232 second class and 768 third class passengers.

In October 1939 the Asturias was converted into an armed merchant cruiser for use on patrol in the South Atlantic and on the 25th July 1943 she was torpedoed by the Italian submarine ‘Cagni.’  Written off as a total loss she was bought by British Admiralty and towed first to Gibralter and later Belfast for repairs and began another life as a transport ship bringing immigrants and orphan children to Australia, and later as a troop carrier.

In 1946 Australia signed an assisted passage agreement with Britain. The agreement specifically targeted British ex-servicemen and in 1946 the Asturias undertook her first voyage as an immigrant service between Southampton and Sydney.

The scheme was later extended to ex-servicemen from other countries. In 1948 Australia signed an agreement with Malta, which resulted in hundreds of Maltese passengers travelling on the Asturias under the assisted passage scheme. Many of these passengers were young tradesmen travelling to Australia to work.  After having worked for two years they were eligible to bring out their families. As there were labour shortages in Australia at this time many of those who arrived on the Asturias came to work on the hydro-electric schemes, such as the Snowy Mountains Scheme in NSW and the Hydro Electric Scheme in Tasmania.

Between 1946 and 1952 the Asturias made twenty-four trips to Australia, carrying more than 30,000 immigrants. There could be up to 1,600 passengers on each trip and travel time from the UK to Australia was approximately four weeks.

In the twenty-five years following the Second World War more than one and a half million British immigrants came to Australia. Many of them travelled as part of the assisted passage scheme which saw adults travel for £10, while children travelled for free.  These immigrants were often referred to by Australians at “ten pound poms,” sometimes in a derogatory way.  The term was actually incorrect, as many of the immigrants were from other areas such as Scotland and Wales, and many were also from non-English speaking countries.

The Asturias also had another role.  After World War II orphaned children were shipped to Australia from children’s homes in Britain. Ostensibly sent out to be adopted by Australian families, many were to find themselves abused and used as cheap labour. Many years later it was revealed that a great many of these children were not actually orphans, but had relatives who didn’t know they were living. One of the first ships used to transport these children to Australia was the Asturias. On her first journey in 1947 in this role she carried 147 boys and girls.

In 1952 the Asturias was refitted in Belfast and was managed by the Royal Mail Lines as troop transport. Finally, in September 1957, she was released from service and arrived at Faslane where she was broken up.

We are lucky enough to have a ‘Sports and Entertainment Program’ from her days as an immigrant vessel. It seems as though the trip to Australia was very full of many forms of entertainment! 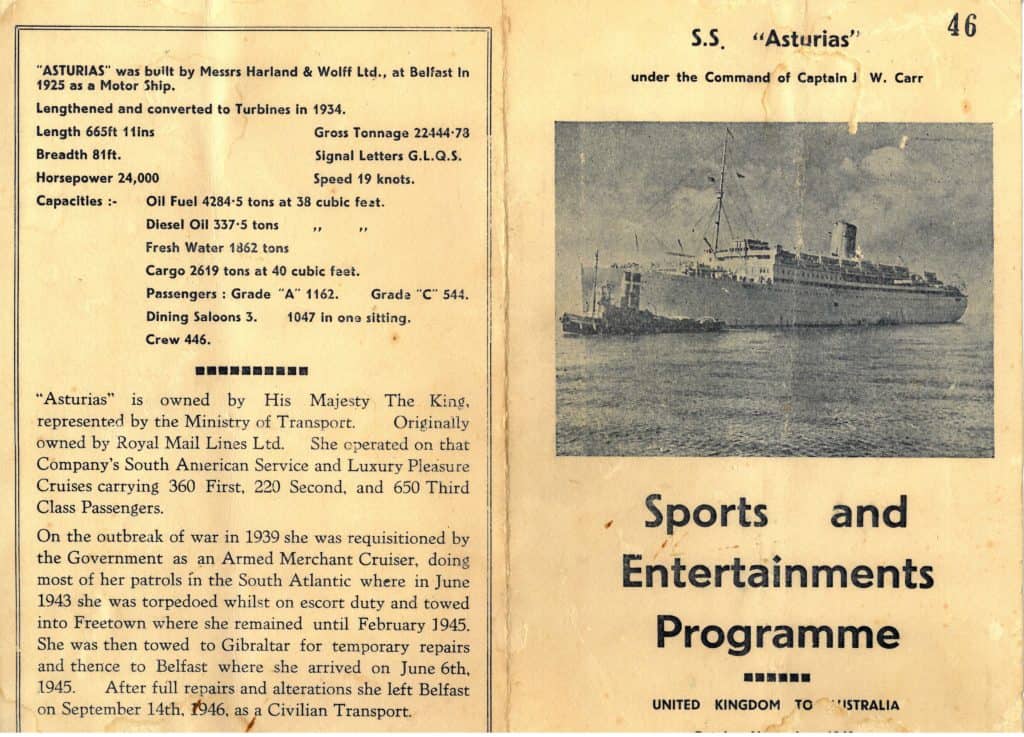